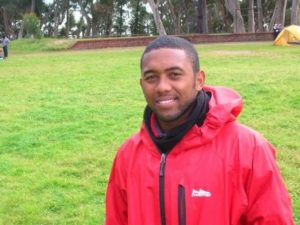 In May 2002, I arrived at a place where all I saw were green trees, open fields and lots of people in uniform who intimidated me. I stood in a line, waiting to write my name down as one of the new recruits of 02 Delta, and was told to stand still and put my bag on the left side. I took one look at my dad and he just gave me a smile knowing that I’m going to be in for one amazing ride.

We were then introduced to a group of people that we called instructors and boy, they looked the part and made sure that we knew who was going to be in charge. We heard the instruction “HEY, PLEASE SIT DOWN, TAKE OFF YOUR CAPS AND EARINGS AND LISTEN!” At this time my blood was racing and I was feeling warm all over.

This was the start of the best three months of my life. I have been challenged to such an extent that I didn’t see myself as an introvert any more. I was forced to voice my opinion and to stand up for myself. We had to deal with Big names such as Watton, Flowers, Stimella, Fortuin and Van Wyk. If you see them, then all you have to do is follow orders otherwise you will get OPPIES as we called it back in the day. There was no time to look for mommy or daddy because we were treated like adults, but also as students. Spending time with over 100 males in one hostel was an experience on its own, and it was exciting to see all the testosterone flying around.

All the phases really challenged me into growing as a person and as a man. I never knew that I could climb mountains and paddle on rivers and lead a group of my peers. I was fortunate enough to be chosen as one of the Junior Leaders to take up a leadership role on the next course and that was scary, but soooooo exciting. I then spent eleven (11) years of my life at Chrysalis Academy. Without a doubt, I must say, THEY WERE THE BEST YEARS OF MY LIFE.  I moved up the ranks from Junior Leader to a Senior Instructor, where I had many functions and worked with amazing instructors such as Flowers, Marthinus, Van Wyk, Phillips, Mafoco, Piet, Yolelo and so many more. We were not just a team, but we became family. We worked like family, partied like family and argued like family, but at the end of the day, we had one goal in common, and that was to unleash the potential of the students stepping into those gates.

In 2013 until now, I had the opportunity to move to the Western Cape Department of Cultural Affairs and Sport, where I am using most of the skills that I have learnt at the academy, to do my daily work. It is so much easier going through life with the knowledge that I have gained as a Chrysalis Academy graduate.

I am currently a Recreational District Manager and still see some of my old students and some of the other graduates along the way. We all smile and greet each other with the respect that a graduate deserves. I got married, have a beautiful wife and two children, and I can say that I treat them with respect because of the values and experiences I gained way back at the academy. I still volunteer my time at the academy and wish to continue to give back to the academy and to my community.

In summary, Chrysalis Academy changed my life and I am and will always be grateful for the opportunity. I always promote the program and encourage young people to go to the academy and take up that challenge. I still live by the motto “Don’t ask if it’s worth it, only ask if it’s worth doing”.

I congratulate the Chrysalis Academy on achieving 20 years.  May it grow from strength to strength.

Alumni Celebrating the achievement of Chrysalis Academy graduates over the 20 years!